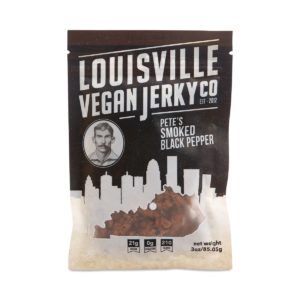 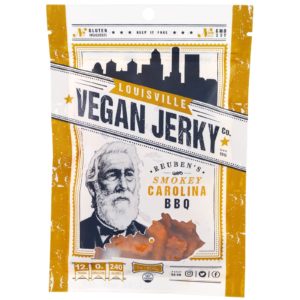 – Made with high-quality maple syrup

– Free of gluten and cholesterol

Country of origin: USA, Kentucky (Made in the USA)

Louisville Vegan Jerky Company was started in my home kitchen back in 2012. Having spent some time in Oahu as a child, I was craving manapua. Using my mom’s old recipe, I substituted baked soy for the pork and popped my seasoned protein in the oven. I was busy preparing the dough and chatting with friends when the smell of chargilled meat hit my nose. “Toe-y!” I screamed at my three legged dog, Tofu “I forgot to set a timer!” The barbequed soy protein was over done, super chewy, and absolutely delicious. Tofu agreed. I headed straight to the local bar where I passed around bags of my newly discovered jerky to a full patio of hip Louisville beer drinkers. Within minutes, everyone was as excited as I was. they devoured the fortuitous first batch and ask for more. Where could they buy it? What was it called? And best part… none of them even new it was vegan.
Today, Louisville Vegan Jerky is sold in stores all over America, but we still make each bag the same old way – in small batches, by hand, and with freshly sourced Kentucky ingredients. It’s a difference you can taste, and a cruelty – free, American made product that we’re proud to call our own. One Bite and you’ll agree, fake has never tasted so real. So grab a beer and join us,
there’s plenty to go around.

Contains Soy. Made in the USA.